Whenever I take flight journeys, I am so inspired watching the breathtaking view outside. Literally, sky is the limit to one’s imagination. I have been planning to write down the contemplations since long. Finally, I have come up with something trying to capture the most I could.

So, here it goes… 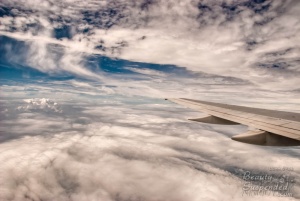 The small window captured a spectacle

Of the colossal planet

Down into an immense blue, they flowed,

Where the ruffles in the deep waters

Then into the clouds, gliding,

He lives a dream

By the tranquility of all the whiteness around

That the eye can take in,

Of walking on the skies and

Snuggling in the curly soft shapes.

Then come the graceful peaks

A sharp turn and so near

He feels he could touch Everest

But another lurking fear

Of ramming into them!

As the flight plunges,

He gets butterflies in the stomach

Of descending from an astonishing reverie

To the wonted life

And he gets swept with the crowd

With brisk steps and business in mind

Lost in the skies is the imagination

And splendour of the earth.

One thought on “Ephemeral Trance”